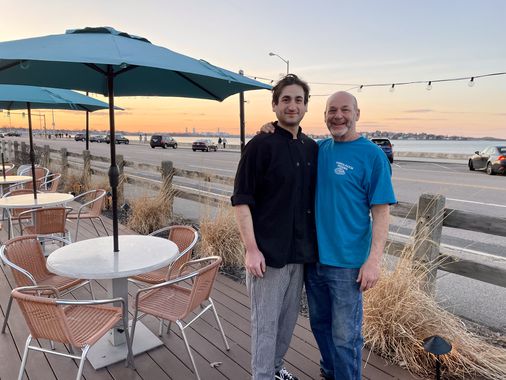 A vegan seafood restaurant is opening in Quincy (and its patio isn’t a shrimp, either)

Most said they came to experience the restaurant’s niche dishes: from plant-based seafood, from shrimp to crab cakes to lobster rolls – served with coleslaw and fries, well safe.

“Everyone is talking about it, and I couldn’t wait to try it,” said Mike Foley, 31, a social worker who lives in Quincy. “[It’s a] very cool concept – and I love that it’s local. I usually have to go to Boston or Providence to get [vegan] food.”

Get the Big Task

Your guide to staying entertained, from live shows and outdoor entertainment to what’s new in museums, movies, TV, books, restaurants and more.

Owners Craig and Travis Somers, a father and son team who own AJ’s Stone Oven Pizzeria (and Garden Patch at AJ’s Pizzeria, its vegan counterpart in the same location) in Norton, said they don’t know of any other restaurants in New England — or in the country, for that matter — who specialized in vegan seafood and saw an opportunity to fill a void.

“We had been looking for a second location for a year and a half, and I had my eye on this place for a while. I mean look at it,” said Craig Somers, 59, proudly gesturing toward the patio, with Quincy Shore Drive and the bay beyond. “Vegan seafood is a fairly new category in plant-based foods, and having it here at the beach made sense.”

Garden Patch by the Sea, open daily from 8:00 a.m. to 9:00 p.m., also serves non-seafood vegan and vegetarian dishes that feature on the Norton Restaurant menu – including subs, salads, pizzas, a variety of desserts and ice cream (both hard and soft-serve) — but it focuses on plant-based seafood, and Somers said he hopes to switch to an all-vegan menu.

While many items are made in-house, most seafood (made largely with a combination of plant proteins from peas, chickpeas, lentils, soy, fava and white beans) comes from outside suppliers, Somers said. .

“It’s about flavor and texture and how it’s cooked, and a lot of our food tastes the same as its mainstream counterparts,” added the Sharon resident, who is vegan. “Based on the reaction we got from customers at our other restaurant and those who visited us today, they are very satisfied.”

Travis, 24, added: “I love it when non-vegans try it and say ‘it’s really good’ or ‘are you sure it’s made from plants?’ It happens all the time, and now with our new waterfront location, I think we’re going to have a whole new clientele, including a younger market with people more inclined to order plant-based foods.

John Loporto, 40, a Boston Public School teacher who lives in Quincy, said he was “very interested” in trying the food from Garden Patch by the Sea when he visited the restaurant with his wife and his son Thursday.

“I love that it gives us another great option. We’re used to not having a lot of choice in restaurants,” since he and his wife don’t eat meat, he said. celebrates the audacity of trying to open a vegan place on Quincy Shore Drive. It’s a crazy experiment and I’d love to see it succeed.