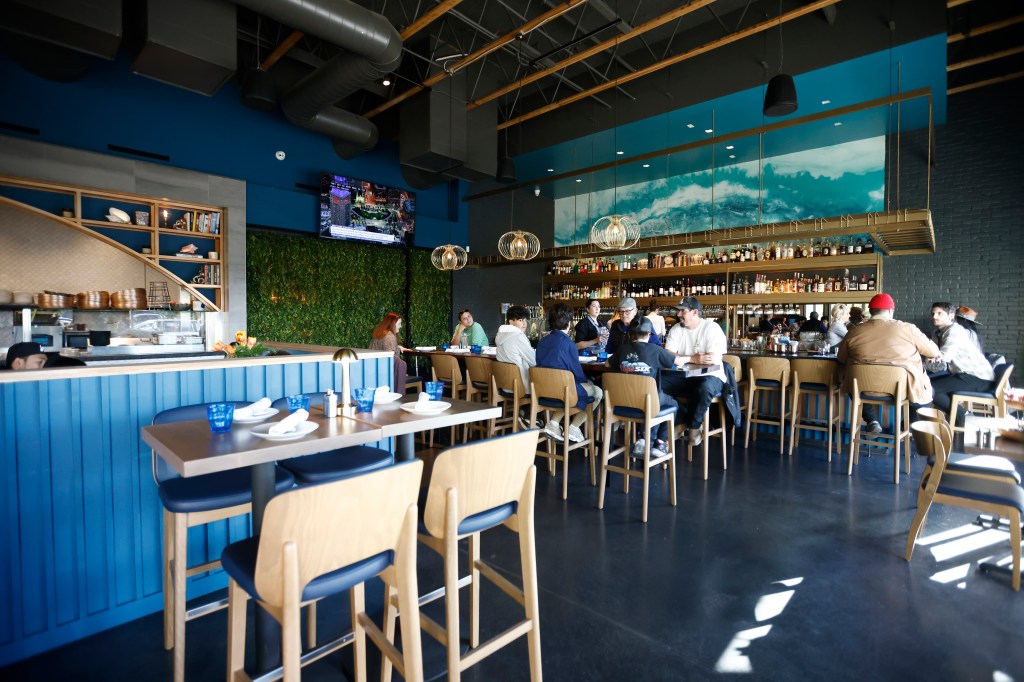 It’s named after the Jersey Shore borough where chef-owner Nicholas diArenzo spent his childhood summers feasting on crab. The new restaurant is in the location that once housed EMC Seafood & Raw Bar, which closed during the pandemic, although EMC’s San Jose location remains open. And despite a bland exterior, the new dining room is awash in bright ocean blue accents.

Most importantly, the seafood restaurant, which receives local, sustainable seafood delivered six days a week, is an opportunity for diArenzo to make its mark on Bay Area restaurants. He spent 20 years climbing the San Francisco food scene before opening two fine dining establishments, Market Tavern and Prime Table, in Stockton, where he lives with his family.

Starters like miso-roasted black cod and spring halibut with mashed asparagus show diArenzo’s flair for flavor and technique, not to mention pretty food. The brunch service, which launched this month, features a mouth-watering poached lobster Benedict and French toast made with brown sugar and vanilla babka baked by Fire Swamp Provisions in Sebastopol. Did we mention the smoked salmon and bagel towers?

Here’s our take from a recent Sunday night dinner.

VIBE: Coastal. Longport is bathed in a dreamy cerulean blue, down to the leather stools, water glasses, and dramatic semicircular banquette, which is the best table in the house. There’s also an open kitchen and a large bar with sand-colored pendant lights and plenty of seating.

FOOD: Large menus usually make me nervous, but Longport’s is just big enough — with raw sea bass, salads, soups, sandwiches, and wood-fired entrees — to ensure something for everyone. If you’re bringing a group, opt for a seafood tower, like The Tugboat ($80), which includes oysters, clams, ceviche, half a Maine lobster and a mignonette of kombu. It is a solid appetizer for two to four people.

Distinctive entrees include the spicy salmon tartare and crispy rice cakes ($12) and Calabrian maple butter toasted cornbread ($12), while the soups and salads are pretty standard. There’s a New England Clam Chowder ($6 cup, $10 bowl) and an LFC Louie salad with a choice of Oregon Bay shrimp or Dungeness crab ($15 small, $32 large).

For this miso-roasted black cod ($38), diArenzo marinates the cod for three days in miso, mirin, sake and sugar. The crispy potato terrine that accompanies it takes a lot of work: the potatoes are sliced ​​very thin, covered in butter and pressed overnight before going into the deep fryer. Both dishes often sell out.

The halibut, a specialty of our visit, came with colossal asparagus and shaved Brussels sprouts from Zuckerman Family Farms in Stockton. The dish is finished with a delicious green garlic and bacon vinaigrette. Burgers and sandwiches complete the offer. Even the kids menu is solid. Crispy Panko-Crusted Chicken Tenders are made from brined Mary’s Chicken.

BEVERAGE: A selection of 10 craft cocktails ($14 each) made with local spirits, like Spirit Works Vodka from Sebastopol and St. George Spirits Terroir Gin from Alameda. There are also 11 craft beers on tap, mostly Northern California, and 21 wines by the glass starting at $12. The bottle list includes a mix of California, France, Italy and beyond, with most offerings in the $45 to $68 range.

DO NOT MISS : Eye-catching desserts, like a passion fruit pie with Biscoff crumble and a giant, crispy meringue shell ($12) and an organic black tea-infused panna cotta with boba pearls in syrup and a black sesame tuile ($12) .

For more food and drink
follow us on Flipboard.