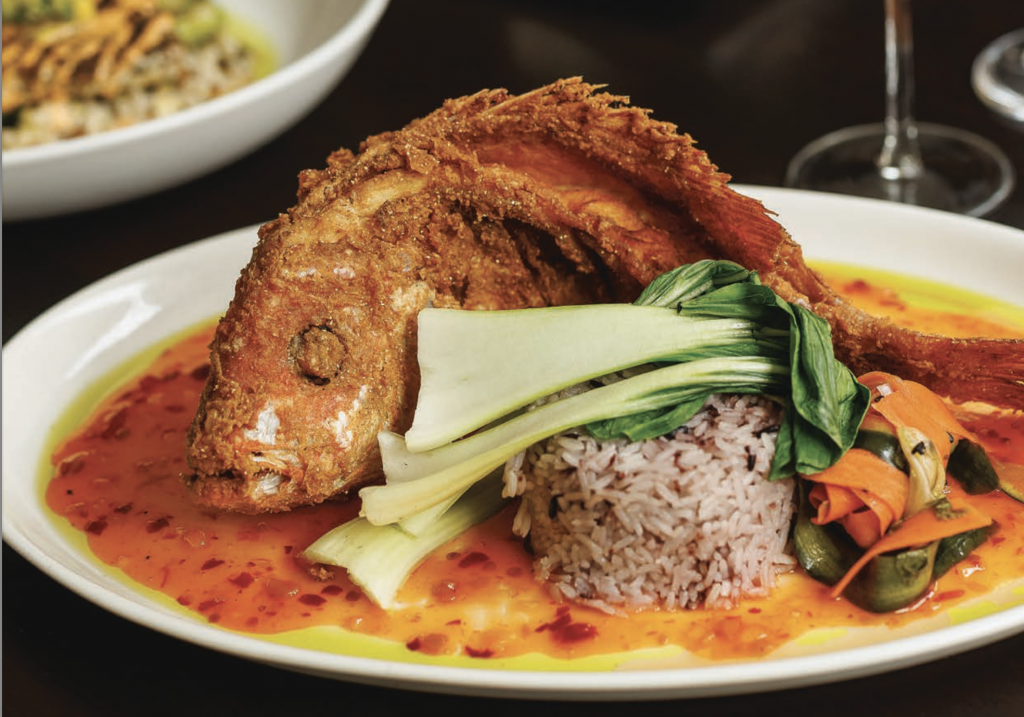 This summer, Grand Rapids welcomed an upscale seafood restaurant poised to serve an underserved niche in the downtown dining scene.

Michigan isn’t exactly a seafood paradise – despite having great Great Lakes fish – so it’s no surprise there isn’t a wide variety of restaurants serving a huge range of seafood. Leo’s has ticked the box since the early 2000s, Fish Lad’s is a vibrant downtown market retailer, and Beacon Corner Bar recently opened to fill the niche, but the May opening of Real Seafood Company, 141 Lyon St. NW, was a welcome addition. So far, it is delivering on its promise to add quality seafood to the market.

The fact that Real Seafood Company delivers shouldn’t be too surprising, as its parent company, Mainstreet Ventures Restaurant Group, has delighted many Grand Rapids diners over the years at The Chop House and Palio.

Ann Arbor-based Main Street operates much like a local business here in Grand Rapids and Mainstreet CEO Kevin Gudejko said it hopes to add to the increasingly vibrant dining options in Grand Rapids.

“We made this commitment almost 20 years ago with The Chop House. I am very attached to the city and to the west of the state,” Gudejko said.

The Chop House has been a staple of the downtown Grand Rapids dining scene since 2004. In 2017, the company opened the Italian-focused Palio on Michigan Street NE, near the edge of the Medical Mile, as society anticipated the accelerated growth of the city. the health industry.

“Both of these exceeded our expectations and the environment was conducive to business,” Gudejko said. “The city has done a great job of accommodating us and many industries in the city. The community has made it a positive experience and it’s a great market to hire. There are a lot of great people in Grand Rapids.

Mainstreet has several concepts, so the Real Seafood Company was the logical next step in Grand Rapids.

Gudejko said he was interested in the new retail space in the revamped Fifth Third Building. The location was to be a Brazilian steakhouse chain, Texas de Brazil, but Gudejko said the ownership group could not commit to Grand Rapids. As Mainstreet has a strong relationship with CWD Real Estate Investment, which owns the building, Gudejko said they were able to claim the open space due to the COVID-19 pandemic.

However, choosing what was in space was no picnic. Fortunately, Mainstreet has several concepts already proven in various Midwest and Florida markets. Real Seafood Company has locations in Ann Arbor, Bay City, Naples, Florida and Toledo, Ohio.

“One of the advantages we have is having four different concepts, which allows us to assess a market and determine what to do next,” Gudejko said. “The city of Grand Rapids, we were very attached to it. We were already looking at what else we could do here that fits the needs and the market. There’s not a lot of seafood, so that was a no-brainer.

For years, one of Grand Rapids’ favorite restaurants was Charley’s Crab, which at the time was an upscale seafood restaurant, a go-to date night for many Grand Rapidians. Since its closure, Leo’s has continued to carry the torch of high-end seafood in Grand Rapids. But as a growing city, there is more than enough room for several quality seafood menus.

While Mainstreet was already opening up a concept with multiple locations, Mainstreet Chief Executive Brent Courson said that doesn’t mean it’s destined to be the exact same in West Michigan.

“We have a bunch of restaurants, but it’s not cookie cutter for us,” he said. “The people of Grand Rapids are different from those of Ann Arbor, and even the seafood available in South Florida is different from that of Michigan. All menus are unique.

“It’s a combination of all these great menus. They are the most successful artists in these places and colorful plates with new ideas. »

Real Seafood Company has a history. Although not here in Grand Rapids, the restaurant has been in operation in Ann Arbor for over 40 years. It continues to endure and evolve, at least as much as a seafood restaurant can.

“Chief [Courson] did a great job of anticipating what we see in the market,” Gudejko said. “You come back to the world of Real Seafood Company 20 years ago, even 1975, and tastes have changed. It’s not just really good fish and protein that comes with a great selection of sides. It does a great job of composing overall dishes.

The menu begins with a small selection of raw sea bass options, including market-fresh oysters, served with strawberry reseda. There are also grilled oysters, oyster shooters, and a chilled seafood platter which is relatively inexpensive compared to other seafood restaurants in town ($70).

Entrees were an interesting collection of options. Some were better than others. The calamari was an uninspired fried version seen at several restaurants in town. The shrimp cocktail was, of course, simple, but the cocktail sauce added a nostril rush. The crab guacamole sounded interesting, and while the presentation was less than spectacular with what looked like store-bought tortilla chips, the taste was telling after the initial impression.

The waiter wasn’t surprised by the newbie reviews and let us know his true feelings about the items, which helped guide our next orders. Waiters guiding diners are an underrated feature of restaurants and they shouldn’t be shy about offering their input to help diners have the best possible experience at the establishment.

There are often at least six options of fresh fish dishes.

Signature entries also have some enticing options. The scallop risotto – which includes two incredibly easy to miss foods – was impeccably cooked. The scallops looked like perfectly seared pieces of butter, while the risotto was cooked extremely well with a mix of fresh vegetables, which made the otherwise heavy dish feel rather summery. Other entrees include surf and turf, crab-stuffed salmon roulade and paella, but also less expensive entrees like fish and chips and lobster and fries.

The menu was similar in many ways to any seafood restaurant across the United States. But there were more than a few interesting twists on the plates that help separate the restaurant from similar concepts.

“I appreciate the style and the concept, the demands it places on chefs and their abilities,” Courson said. “We are not tied to anything. What does the Midwest taste like? We honor select preparations from countries around the world with great seafood. We have great Latin American, Mediterranean, Asian, New England and Southern states represented in colorful dishes.

“We want to take diners around the world with flavors, textures and colors.”

Real Seafood also stays on the fresh side of produce, which of course can be a challenge with pricing and supply now.

“I liken it to shopping at the grocery store,” Courson said. “The supply chain on the food side is no different than what we experience in almost everything. If I had bananas on the list, but the bananas might not be good on the shelves, you have to so you turn to what looks good and that’s what we’re going to serve.

“There will be times when we don’t have fresh snappers. If high quality fish was not available, we would not have it on the menu. These outages will happen and thankfully it seems people are more forgiving in these times opposed to needing items all the time. When the customers come in, we’ll have the best, highest quality fish possible.

As Courson focuses on navigating the increasingly difficult supply of high-quality food, Gudejko said he wants front desk staff to focus on ensuring guests have a great experience, no matter what’s in their glass or on their plate.

“We try to focus on the total experience,” he said. “We are here for people to enjoy their time and I think table turn times have increased post COVID.

“It’s not just a meal, but they’re spending time having a great experience. What used to be a group of four taking an hour and fifteen (minutes) will be an extra half hour. It’s not just eating; we want to be part of the entertainment.