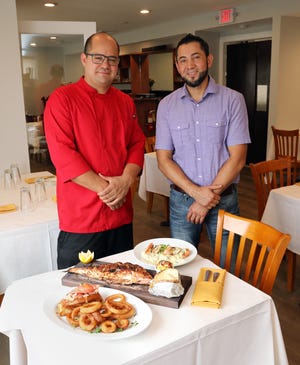 It may be cliché, but for Naldo Morales and Nelson Lopez, opening their first restaurant in Mamaroneck is a dream come true.

Both are brothers-in-law: Morales immigrated to the United States from Guatemala when he was 10; Lopez came from Puerto Rico at age 17.

Over the years, they have held various positions in a multitude of catering establishments, ranging from dishwasher to waiter to, in Morales’ case, chef. For seven years he worked at the Tiki Bar & Restaurant in Rye and for the past six years he owned the Harbor Fish & Company fish market in Mamaroneck.

Surviving Ida: How Some Restaurants Survived While Others Didn’t

Insider News: Sign up for the free lohudfood newsletter

When he heard that space was available where Il Castello was located, a few blocks down Mamaroneck Avenue from his store where he already had a loyal clientele, he jumped on it, chatting with Lopez, who most recently worked at Appetit Bistro in Port Chester. .

Diners will now see Lopez working in the front of the house with Morales in the kitchen at their first place together: Harbor Restaurant & Bar opens at 11 a.m. on September 14 and will serve lunch and dinner.

Those who were fans of Morales’ food will be happy to know that his lobster rolls (in Connecticut and Maine styles) are on the menu, as are his popular Cajun seafood broths. With the new, larger space – there are 44 seats inside and an expansive 40-seat rear patio, complete with ceiling fans – he is delighted to show off other menu items such as whole red snapper, prawns in creamy coriander sauce over risotto, mussels with either marinara, fra diavolo or garlic sauce and branzino with caper sauce.

The menu is long and varied with shrimp, cod and steak tacos as well as a host of wraps (hello shrimp po’boy), sandwiches and salads. Main courses include seafood linguine, rib eye, vodka penne, lobster tail and fried whiting. Prices range from $12 for salads to $16 for sandwiches, $28 for organic steamed salmon and $35 for lobster rolls, both of which are packed with meat.

Morales said he was able to keep his prices reasonable — his lobster tail with steak is $55 — because of his long-standing relationship with vendors. And while he knows costs are a concern due to rising inflation, he said he’s used to being creative and will deal with whatever comes up as he goes. and as you go.

That means he has to adjust his hours, if he finds the seven-day-a-week 11 a.m. to 10 p.m. operating schedule too much. He also isn’t worried about being in an area that was a flood zone during Hurricane Ida, as the building owner fortified the space with pumps and made other adjustments. All he had to do was make some cosmetic changes.

“Many people have been going to this stretch of Mamaroneck Avenue for years,” he said. “If they survived, I know that I too will survive.”

Lopez added, “You have to start somewhere and for us this place felt like a great opportunity. Together we are making our dream come true.”

If you are going to

Good to know: Parking is either on the street or at the Mamaroneck station across the street. There is also plenty behind the restaurant that is available after 4 p.m.

FOR YOUR INFORMATION: The brothers-in-law are still waiting for the restaurant’s liquor license.

Jeanne Muchnick covers food and catering. Click here for his most recent articles and follow his latest culinary adventures on Instagram @lohud_food or via the lohudfood newsletter.

a new nightlife option in Fort Worth