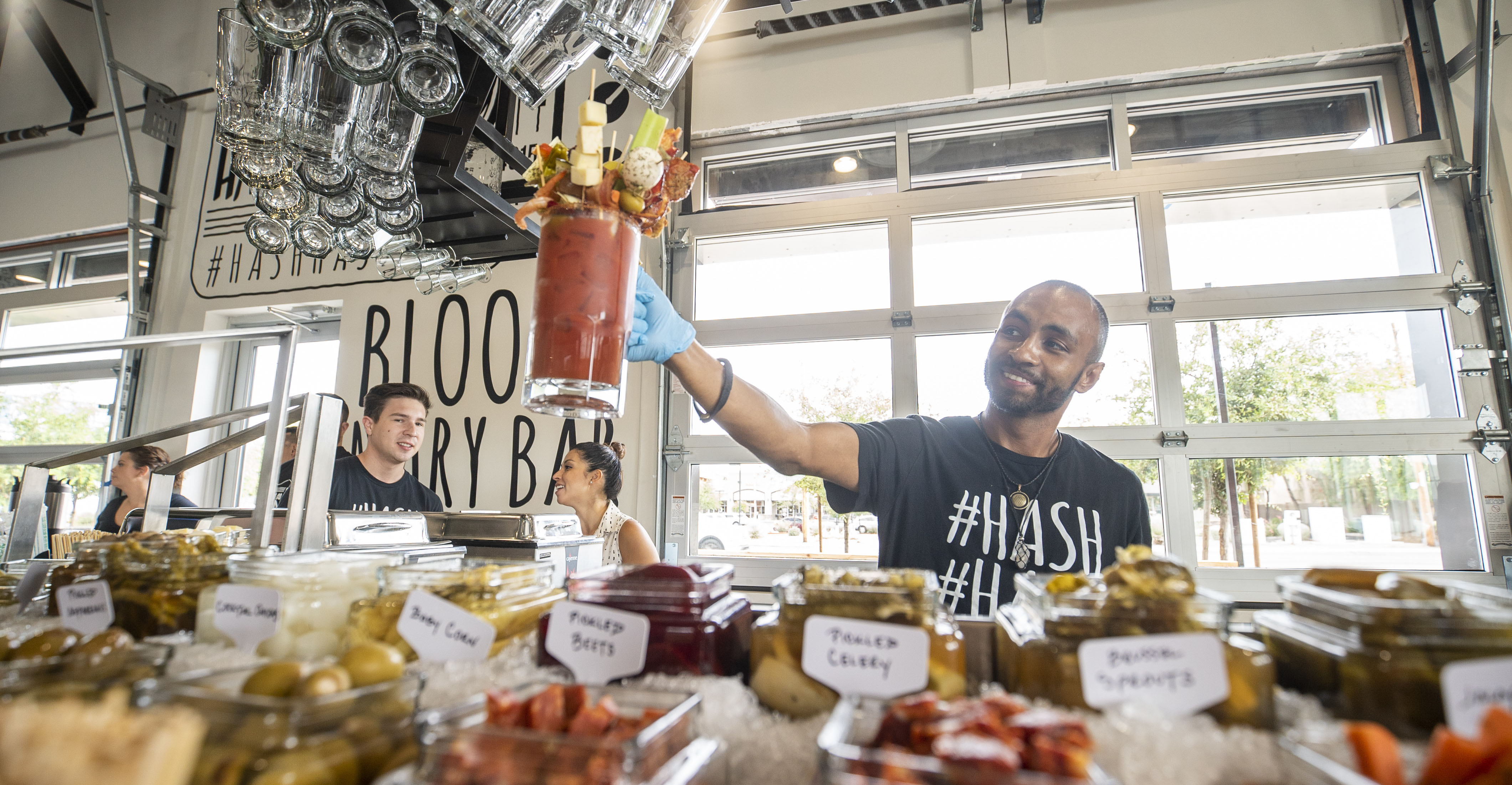 Hash Kitchen brings the party to the breakfast restaurant category

Emerging brand Hash Kitchen, based in Scottsdale, Arizona, is looking to bring something new to the breakfast table: a party.

While traditionally casual breakfast and brunch concepts fall into the family dining category with robust kids’ menus and family fare, Hash Kitchen CEO and co-founder Joey Maggiore thinks the breakfast might need to be turned upside down. Hash features a Bloody Mary bar, social media-friendly food — including a Ferris wheel of cupcakes and cereal milk shots — and a DJ on the weekends.

“We’re not recreating the breakfast world, but we’re creating it for Hash,” Maggiore said. “It’s all over the top, out of the box and in your face. … This is no ordinary place to go for a cup of coffee. This is a place where you will start the day with a party or end it with a hangover.

Take the Hash Kitchen tour below.

Hash Kitchen accentuates that Instagram-friendly nightclub vibe with mimosas that you can add a cotton candy glitter bomb to, and over-the-top Bloody Marys that come in a blood bag with Type O and Type A varieties. +.

For now, Hash Kitchen is hosting the party in five locations, but thanks to an investment from Savory Fund announced in November, the concept has two restaurants under construction and four more behind the scenes. Hash Kitchen hopes to open eight locations by 2023, initially focusing on markets like Denver, Dallas, Houston, San Antonio and Salt Lake City.

“How can we continue to think outside the box? How are we going to reach new markets? Can we really be that culture that drives the strength of breakfast or brunch? Major asks. “I think the next two years you’re going to see major growth from us.”

As Hash Kitchen grows, the brand will continue to evolve. Maggiore’s business partner, his wife Cristina Maggiore, is developing a new store prototype with updated logos, colors and design that highlight the restaurant’s personality. Technology will also play a big role in Hash Kitchen’s future, as the company looks to invest in portable point-of-sale systems that will help reduce labor requirements and wait times for the restaurant.

Maggiore is also constantly thinking about the next big thing to add to the menu. Next up will be a new tabletop Ferris wheel loaded with bourbon-glazed cinnamon rolls.

“If you want to come and get scrambled eggs, we’ll have that for you,” Maggiore said. “But everything about Hash is that you feast with your eyes first.”