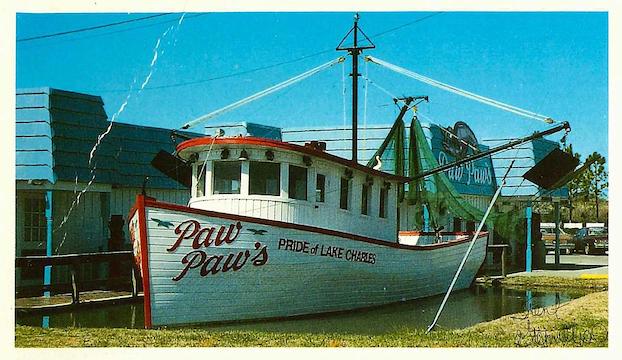 I noticed that the Paw Paw Shrimp Boat on the Martin Luther King Highway is now missing, but why was it there?

The shrimp boat, named Paw Paw’s Pride of Lake Charles, was a feature of a seafood restaurant once located on this site.

The previously sunk boat was salvaged and refitted in 1972 and moved to its new landlocked home in a purpose-built “lake” on the Martin Luther King Highway near the corner of US 90.

The 42-foot-long boat was built in 1965 for Cameron’s late Roland “Bolo” Trosclair, according to a November 21, 1972, article in the American press.

“Trosclair sold her to the Griffith boys of Cameron and she actively engaged in shrimp fishing until 1970 when she sank,” the article read. “It was recovered and sold to OJ Bourg.”

Bourg would later sell it to “Paw Paw” Cormie, who restored the craft and used it as a special tourist attraction in front of his son Nathan’s restaurant, Paw Paw’s Seafood and Steak House. The boat included additional dining facilities on deck and a fully equipped wheelhouse to entertain younger diners. The artificial “lake” in which it was moored was also filled with catfish.

The restaurant was demolished in 2007, but the boat remained in its man-made lake, slowly succumbing to the elements until it was removed last year.

How do I get a COVID-19 rapid test kit mailed to my home?

Free tests can be ordered at covidtests.gov or usps.com/covidtest. The first tests were to be shipped from the end of January.

The White House said the tests will ship within 7-12 days of ordering via the US Postal Service.

The Centers for Disease Control and Prevention recommends home testing when people experience COVID-19 systems, including fever, cough, sore throat, respiratory symptoms and muscle aches; five days after potential exposure to COVID-19; or as part of testing protocols to stay in schools and workplaces.

Informant is written by Crystal Stevenson, American press editor-in-chief. To ask a question, call 494-4098 and leave a voicemail or email [email protected]