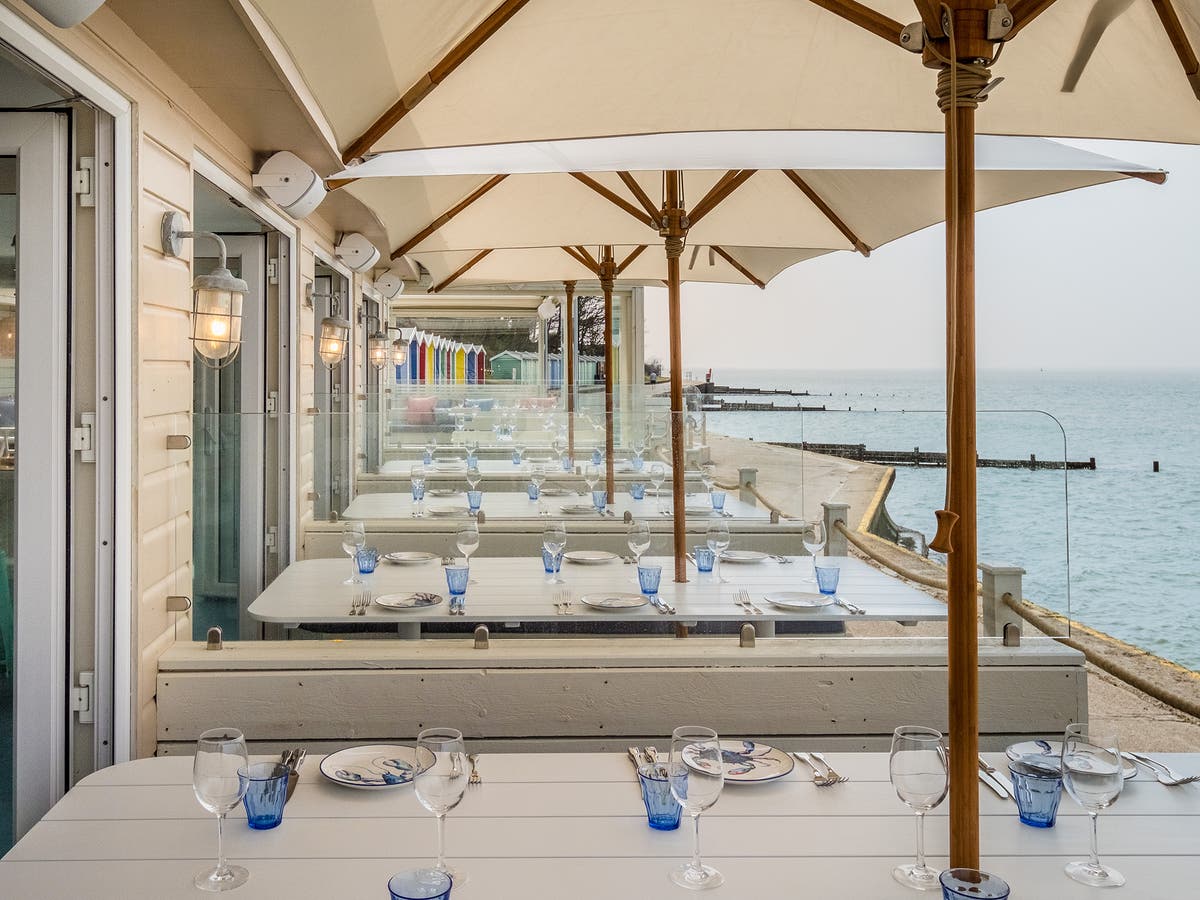 The Hut, Colwell Bay, restaurant review: Finally, a seafood restaurant that’s not as pony as it looks

Bblue skies and even bluer water. Boats (of the classy “sports cruiser” kind) drop guests off at the pier and then pick them up a few hours later, a little noisier, a little more wobbly. Beachfront tables, staff in shorts and flip-flops, and sunshine; glorious, you-can-actually-feel-the-sun. You wouldn’t think you were in the UK…until you heard the Ruckus of Received Pronunciation. But that’s the main draw at The Hut on the Isle of Wight’s Colwell Bay, just a hop, skip and short boat ride from the mainland.

I arrived on one of the aforementioned posh sports cruisers, the Euphoria. Captain Tony Pond and his wife Nadia’s crew, they bought the boat to escape the boredom of old age and now finance their way of life by renting it out from early spring to late summer, mainly to customers from The Hut. It’s the stuff of office-bound Londoners’ dreams. At around £3,000 for a Seaseeker charter, it’s not exactly an affordable ride (their clients have included a celebrity or two), but there’s a ferry and RIB pick-up for the riff raff. Oh and there is also a helipad, but make sure you book ahead as apparently there are people taking a helicopter to lunch.

Is it any wonder, then, that The Hut’s main audience is made up of tourists and “boaters”? Actual islanders make up such a small percentage of their guests that when I mention it to local friends or island regulars, almost everyone knows it, but has never been, and describes it as “a bit classy “. Maybe it’s the Londoner in me, or even the ex-Cambridge townsman, but that seems like a bit of a harsh reputation. Sure, there are plenty of polo shirts and boat shoes, but the prices aren’t extortionate compared to some seafood restaurants in the UK. At around £10-15 for starters and up to £40 for main courses, that doesn’t seem all that unreasonable. Even £55 for a seafood (double to include lobster), and market prices for fish from a day boat aren’t too much of a pain when you’re sharing. The £140 surf and turf is the only figure that raises my eyebrows, even though it includes a huge Porterhouse steak and lobsters to share, and comes on a platter as wide as the table. This is all inconsequential if you paid £3000 for a boat ride to get here anyway.

It’s what they call a “destination restaurant”. You come here for the atmosphere and you stay for the mostly affordable food and pretty decent cocktails. And if you can make a day out of it and split the cost with a group of friends for a special occasion – or just because – why not take the posh boat? Cost of living crisis? Never heard of it.

I’m actually here for the food – the vibes are an added bonus. We start with snacks, which include nocellara olives, overdried sun-dried tomato and arancini dumplings that are hard to finish, no-frills but juicy sautéed mini chorizos, and a pot of “crab straws and dips.” ‘herbs’, which are a flaky delight made even more indulgent with a dip in a creamy and sensual brown crab mayonnaise. Naturally we order a platter of Porthilly oysters, which are some of the freshest and meatiest I’ve had in a while, so much so that they didn’t need a dash of vinegar. shallot or tabasco.

There’s plenty of tartare, tataki, and sashimi in the appetizer section, so if raw isn’t your thing, you’re limited to gazpacho, prawns, “flared” mackerel, ham (yes, ham), or octopus with ‘nduja, which initially appeals to me, but we recommend the fish tacos and seared tuna. The tacos, crispy pieces of battered fish with a mango and spring onion salsa, though probably the least inventive thing in this section, are perfectly demolishable. The tuna is subdued by a vinaigrette with the dubious name “Oriental,” though the pink grapefruit segments are a nice touch. I regret ordering this octopus. Needless to say, the starters feel all over the place, with a few attempts at Asian influence – a sprinkle of togarashi here, a drizzle of ponzu there – but it ultimately feels like a crisis of identity.

I find this is often the case in seafood restaurants, which are sometimes difficult to write about. Where seafood is best is simply. It’s so often overdone or overdone in an attempt to stand out from the crowd – and it’s a crowd. As for the main event, The Hut redeems itself. That’s what we’re really here for: a towering pile of seafood and a whole plaice grilled from the day boat, alongside a really good green goddess salad and a bowl of pretty Provençal roast potatoes. boring. The plaice, which GM Jeremy kindly served us table-side, as at this point we’ve had too many painkillers – their dangerously drinkable signature cocktail – is beautifully light and fresh. We all ignore the superfluous selection of sauces and roasted vegetables it is served with.

Seafood offers freshness and quantity, which they often lack. There is another portion of oysters – that’s how it is but it would have been nice to swap them for something else as we had already devoured a platter – the prawns and prawns from the Atlantic are plump and sweet; the overdone seared tuna makes another appearance but the sea bass sashimi is thankfully smooth and beautiful; the whelks would have benefited from a little butter and garlic; the pot prawns and pickled cockles are a nice touch and remind me of summers spent in British coastal towns where we scooped them up in polystyrene pots with cocktail sticks. The spider crab looked spectacular on paper, but with no dark meat and just the legs, it looks more hassle than it’s worth. A few missed marks in what is otherwise a glorious entry into the tops at this price range. If you had come this far and weren’t a seafood fan, you’d be happy to see plenty of other options, with a good salad section, “Mains” ranging from cheeseburger to steak, and even a reasonable vegan menu. (with vegan scallops made from hearts of palm).

Finally, we retire upstairs to the rooftop bar for another cocktail – this time a Lonkero, with Salcombe gin, grapefruit soda, campari, lemonade and gum syrup – and what my mom would call “difficult bits”, AKA dessert canapes, of which I liked the mint chocolate cups. We spend the rest of our time fantasizing about quitting our daily jobs for a life at sea, until the Euphoria comes back and takes us out of this euphoric state and brings us back to reality. If this is how the people of The Hut live, maybe I can forgive a few menu errors, although I can’t help but feel like I expect a little more from chef-manager Ian Daw , formerly of The Ned. And yet, there’s a reason The Hut is in its ninth season and even on a Wednesday they have over 600 covers and don’t consider it busy. It seems a shame that locals are so put off by its clientele, but the charming and exciting duo of brothers at the helm, George and Matt Adams, are well aware of who attracts a beachfront restaurant less than two hours from the center of London.

All my protestations aside, I still came away feeling like I had a great meal and would both recommend and return myself, if not to try other dishes (this octopus, for one), for the serious vacation vibe just a hop, skip, hour train ride and a quick ride on a swanky sports cruiser.

Finally, a seafood restaurant not as stuffy as it looks