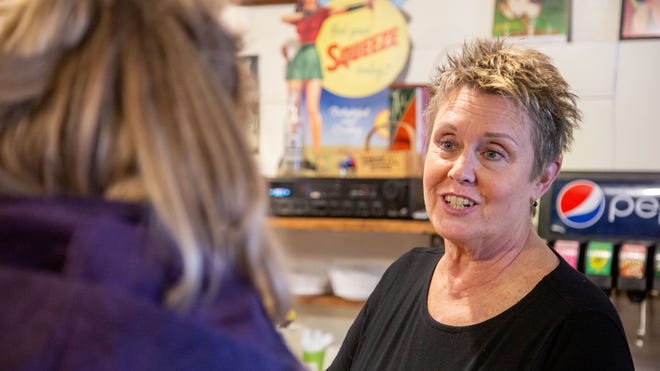 She holds up, but barely.

After nearly 50 years of serving breakfast, the General Store Eatery, 206 Fifth St., will close in December.

“Things have changed,” said Brittain, 63. “Des Moines has too many restaurants and the restaurant industry has changed. It is more difficult to own and manage a local business and be successful. “

She says she had an average of 100 customers a day when she bought the business in 2000. Today, she serves around 50 to 70 people every day, more than half of whom are regulars.

“People tell me it’s a cozy and warm place,” Brittain said. “The people here all know each other or meet after years. It’s a family.”

Much like the old cash register used to place orders, the 80-seat General Store Eatery is a holdover from a bygone era when counters and midday dinners could be found in almost every town in Iowa.

Today, there are only six independent restaurants left for lunch in Iowa, said Jessica Dunker, president and CEO of the Iowa Restaurant Association.

Soon the number will be five.

The genesis of the general store

“I hate to see him go away because it meant a lot to a lot of people,” Veiock said. “It’s an institution, but with the competition and everything, I’m amazed that everything lasts over 50 years.”

The restaurant still operates as it did then: the menu is full of deli sandwiches and homemade soups; the staff are friendly and conversation is abundant.

Veiock said he knew customers by their order, even though he couldn’t remember their names.

He went on to own several other businesses in Valley Junction and was a founding member of the Historic Valley Junction Foundation, the local chamber group that promotes business in the historic downtown shopping district and organizes events like this of this month. Jingle in the junction.

He still owns several properties in the area.

Mark Goodrich, the foundation’s current president, said companies like the General Store Eatery have made Valley Junction a unique neighborhood.

“The general store was… where a lot of relationships were forged,” he said. “It’s sad to see part of the Valley Junction community go, but we wish Teresa and her team the best of luck in their next chapter.”

Betty Gordon, an employee, took over ownership of the restaurant in the late 1970s.

Brittain became a regular customer in the 1980s. When she came over for lunch one day in 1999, Gordon told her that she was preparing to call a broker to sell the business. Brittain, from Urbandale, took over in February 2000.

“Loved it. Loved the decor and loved everything about Valley Junction. It’s like it was meant to be and I’ve had it ever since,” said Brittain. “I wouldn’t have created my own place. I wanted this place.”

Gordon left behind all of Brittain’s recipes, including 50 original soups.

“All of her soups were homemade and we continued to do that,” she said. “I’m a big nut of soup.”

Brittain hasn’t changed the menu much in 19 years. She added a few new soups, like Monday Cheeseburger Chowder, one of the restaurant’s most popular soups.

“And I’m glad she’s kept the place as it was for so long because so many places are changing,” Veiock said. “It’s always nice to go to a place that you consider to be home, a place that never changes and is always predictable. People like it.”

50 years are coming to an end

Robin Renda is the only employee of the General Store Eatery. She and Brittain have been working together for about 10 years.

“We’re a perfect team because I make all the soups and they love to cook,” said Brittain. “She always tries new cookies and desserts. And she also makes the sandwiches as people order.”

Brittain’s husband Kim comes in by fixing outages and cleaning up every now and then.

“This place means as much to him as it is to me,” said Brittain.

Her two children worked in the restaurant. She has seen the children of her clients grow up. Some have become regular customers themselves.

“We have had a lot of parties here with families, birthdays and graduation ceremonies,” she said.

The restaurant will remain open until December 21.

Patrons – new or old – can stop by for a sandwich or a bowl of soup until then and perhaps walk away with a piece of the restaurant’s history. All antiques, souvenirs, furniture and equipment are for sale.

Brittain, who lives in Beaverdale, said she plans to brainstorm ideas for her next business over the winter. One idea she is considering is a cookbook featuring recipes from the General Store Eatery.

“I decided if I couldn’t make them for everyone I would share them,” Brittain said.

The General Store Eatery has a team of repeat customers, so when someone new walks in the door it can turn a head or two, especially when that customer is a famous rock star.

“Alice Cooper was here for lunch when he was in town for a concert,” Brittain recalls of his contact with the celebrity. “It was crazy. When you see Alice Cooper walk through the door, it’s like, ‘Oh, my God. It’s Alice Cooper.'”

Brittain said the musician known for his horror-themed shows, complete with props and fake blood, was visiting the Theatrical Shop when he stopped by the restaurant.

The seafood restaurant is the institution of Gulf Shores

Pay What You Can – Hartford Courant