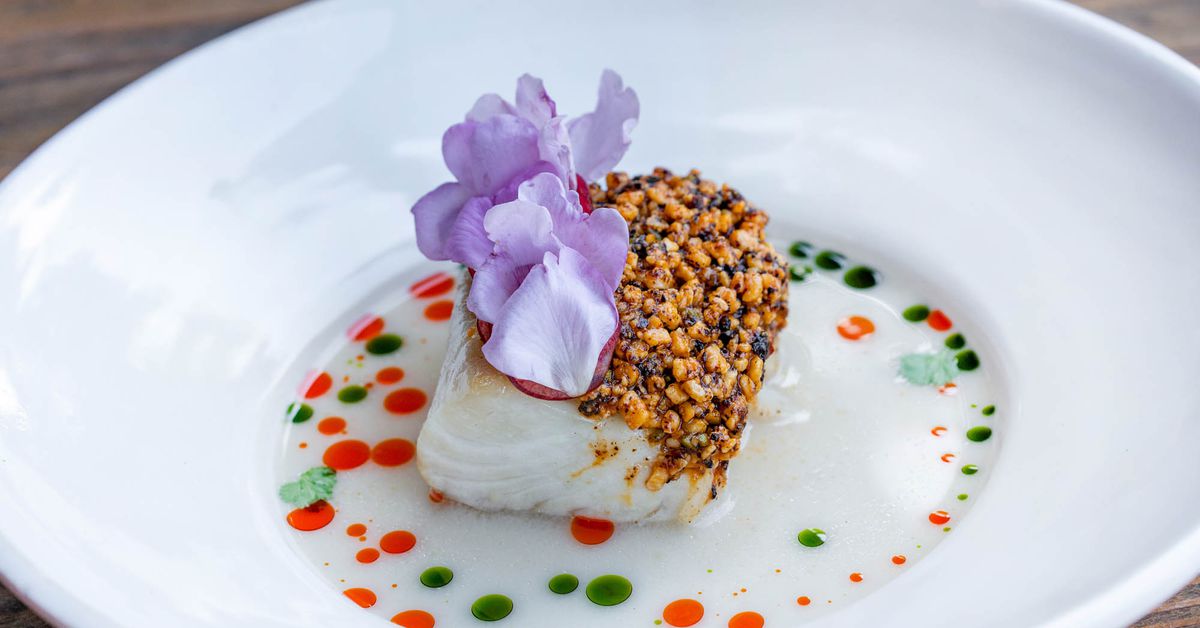 Chef Brendan McGill was fed up with burgers. He had been running Burgerhaus, his pivotal pandemic pop-up that focused on burgers, fries and shakes, at Hitchcock’s restaurant on Bainbridge Island for a year. For a while it had been a fun change from the fine dining approach he was used to, but in the fall of 2021 his heart just wasn’t feeling it anymore.

“I didn’t want to eat that food too much,” says McGill. “The place was a bit greasy. There’s no getting around it when you’re making a million fries every day. He was also tired of only serving food good for takeout, and he dreamed of the days when his restaurant was a place where people came to celebrate events like birthdays and anniversaries.

So McGill sat down with his staff to talk about the future of his restaurant. The team decided to turn it into an oyster bar, something closer to the Pacific Northwest gastronomic philosophy that inspires it. And as McGill’s frustration with cooking take-out grew, the oyster bar concept became Seabird – perhaps its most ambitious restaurant yet, which does away with take-out altogether in a bold break from pandemic-style dining. Chef Grant Rico, who previously worked at the three-Michelin-starred SingleThread restaurant in California, is the restaurant’s executive chef and partner in the business. He brings some Japanese techniques, like using kelp for umami, to Seabird. The restaurant opened on June 9 in the former space of the Hitchcock restaurant, with McGill remaining involved as chef/owner. Café Hitchcock, McGill’s casual bar and dining venue, still serves lunch, sandwiches with house charcuterie, coffee and espresso, and drinks from a full bar during the day, along with flatbreads and charcuterie to pair with wine and evening cocktails.

Seabird, which McGill describes as “unabashedly kind” and “anti-takeout,” is a throwback to the thoughtful preparation and impeccable sourcing for which it became known at Hitchcock. But it’s also a departure in many ways. After 10 years at the helm of Hitchcock, he says customers always expected him to have certain things on the menu, like roast chickens, juicy pork chops, big steaks and pasta dishes. It was therefore difficult to find space for new dishes and ingredients.

“I almost couldn’t change 20 different things,” says McGill. “By focusing on fish and vegetables, we can have 10 different types of fish and dive a little deeper.”

Seabird’s menu is an ode to the richness of Puget Sound. The 45-seat restaurant features a raw bar covered in white granite stacked with several types of local oysters and whole Dungeness crabs. The rest of the menu consists mostly of small plates to share, such as a “set” with Columbia River smelt cured in the style of Spanish boquerones, mussels escabeche and other dried local fish. The green salad includes greens grown on McGill’s Bainbridge Island farm as well as local wakame (the type of seaweed found in miso soup), bonito and kelp pickles. Even the bread is flavored with seaweed and served with sweet kelp butter. Large plates include roasted whole yelloweye rockfish served with koji barley, asparagus and pine nut gremolata (herb paste).

Although seafood dominates the menu, there are also vegetable dishes, such as a dish of maitake served with koji porridge and mushroom consommé, and potatoes and morels with sea buckthorn. and porcini mushrooms.

The drink menu includes many wines from the West Coast, from Vancouver, BC, to Baja California, as well as some selections from Europe. All are meant to pair well with seafood, so diners shouldn’t expect a lot of big, bold reds. The cocktail list also features cocktails meant to pair with the menu, though it’s a full bar, and diners can order most standard cocktails as well.

Like the menu, the restaurant’s design is inspired by the ocean and a blend of Japanese and Pacific Northwest aesthetics. An octopus painted in Japanese calligraphy ink, by Dwight Hwang, hangs prominently in the dining room. A spiny chandelier evokes the shape of a sea urchin. And the facade of the restaurant, which has a few tables for outdoor dining, is painted abyssal blue.

Seabird is located at 133 Winslow Way East, Bainbridge Island. It is open from 5 p.m. to 9 p.m., Thursday through Sunday.