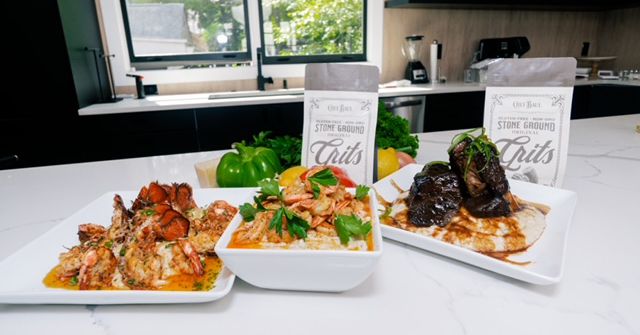 Bryant “Chef Baul” Williams, who has served as private chef to rappers like Lil Baby, 2 Chainz and Kendrick Lamar as well as filmmaker Tyler Perry, plans to open two new restaurants in downtown Atlanta this fall.

Betty Sue’s all-day breakfast and take-out restaurant Binky’s takes over a former McDonalds and sub-store next to the Summit Cafeteria at Five Points Plaza on Marietta Street. Williams calls the move to downtown Atlanta a “central location for all of my clients.”

Serving breakfast and brunch all day, Williams named the restaurant after her grandmother. The menu centers around oatmeal bowls topped with oxtails, lobster and shrimp using his personal range of oatmeal. Packets of Chef Baul’s Grits will also be available for purchase at Betty Sue’s. In addition to bowls of oatmeal, expect pancakes, waffles, egg dishes, and vegan options on the menu, plus beer and wine from the bar.

Williams plans to open Betty Sue’s by the end of the year and says the restaurant’s design has a “nice urban, southern look”.

Paying homage to his father’s nickname, Binky’s will focus primarily on takeout, but is expected to include at least four seats for those wishing to dine after receiving their order. Open for lunch and dinner, the menu features salmon entrees, lamb chops, grilled vegetables, mac and cheese, and fried chicken.

Williams hopes to open Binky’s by the end of September, but certainly before Betty Sue’s opens.

Williams describes her style of cooking as “the soul of the south” infused with flavors from Japan, the Caribbean and European countries. In 2019, Williams opened soul food restaurant Chef’d Up in the Highland Walk Apartment complex at the corner of Highland Avenue and Sampson Street, a space that previously housed Last Word, Cast Iron and The Barrelhouse.

The restaurant closed a year later amid a tenancy dispute with Perennial Properties, the owner of Highland Walk Apartments. The space now houses the Highland Bistro.