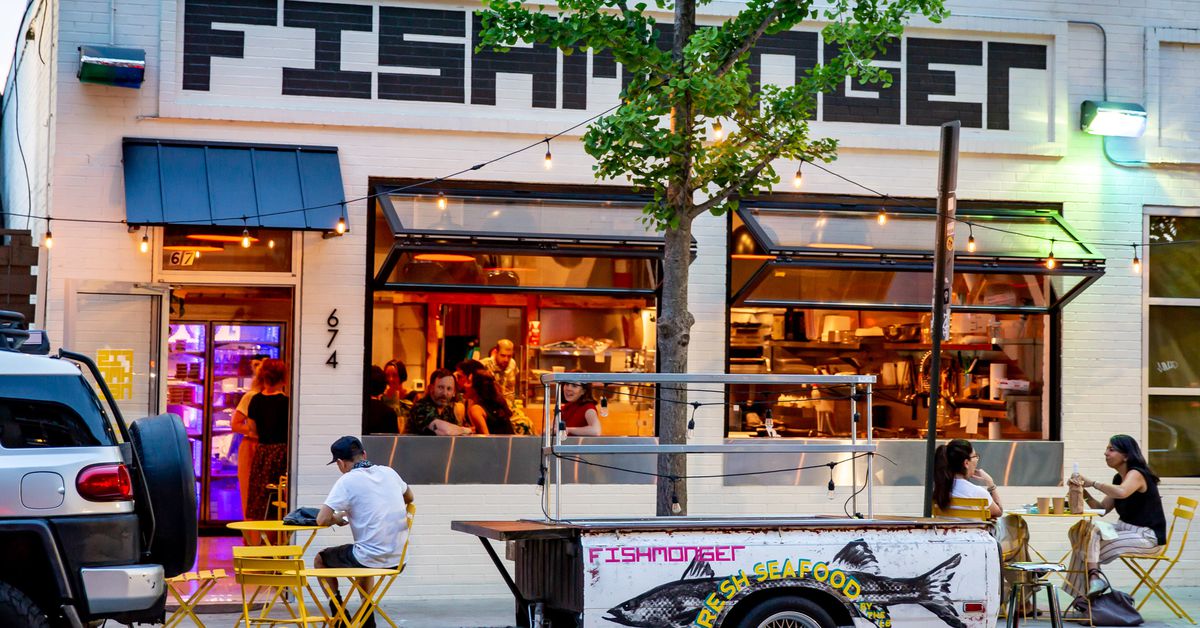 Just four months after opening their seafood market and Fishmonger cafe in Poncey-Highland, Skip Engelbrecht and Nhan Le (8ARM, Octopus Bar) and chef Bradford Forsblom have announced that a second location will be heading to Kirkwood this autumn. The fishmonger is slated to open in mid-October in the Pratt Pullman neighborhood.

Taking over building number seven next to the Dailies and Sides restaurant on Rogers Street, this second fishmonger seats almost 50 people inside and has a raw bar and a full bar serving beer, wine , cocktails and frozen drinks. The patio can also accommodate 100 people outside.

As in Poncey-Highland, expect Pratt Pullman Restaurant to be counter service. However, servers will float around the dining room and patio to take additional food and drink orders. Engelbrecht describes the Kirkwood Fishmonger as “super family-friendly” with a dog-friendly patio and the signature vibe he and Le are known for creating at their other restaurants through music, relaxed atmosphere and design.

A big difference between the two fish shops is the lack of a seafood market in Pratt Pullman. Engelbrecht says he and his partners could consider introducing a marketplace if the demand is there, and have even considered the possibility of a retail arm in Kirkwood as part of the design.

“There is a lot of space. We just don’t want to start with that,” says Engelbrecht. “A market is not as simple as one might think because it is a process and quality control is very important. We want to make sure that’s in place and that the neighborhood and the families here really want it first.

With construction of the building complete and all necessary permits in place, Engelbrecht says they are currently free to focus on the design of the restaurant, including the transfer of key elements from the Poncey-Highland location such as the purple, pink and red neon lighting, carefree decor and relaxed seating arrangements.

Like the Poncey-Highland menu, Forsblom’s Kirkwood menu will not feature much fried fish, but instead will focus on delicate fillets of blackened grouper, crudo, fresh oysters and seafood salads, soups and sandwiches. Also look for six to seven menu specials each day.

“We knew we wanted to open multiple fishmonger locations when we came up with the idea, and then seeing how well it was doing in Poncey-Highland, that just made the decision easier,” says Engelbrecht. “We plan to eventually open a total of four locations in Atlanta, with new fishmongers in Buckhead and the West Side. There might even be a fifth in Sandy Springs.

Engelbrecht and Le originally intended to open Three Heart Coffee Bellsmouth cafe and restaurant in the building now planned for Fishmonger. The pandemic halted those plans. Then, last December, Pratt Pullman District owners Adam Rosenfelt and Maureen Meulen announced they were planning to open a restaurant there called Homage with Dailies and Sides chef Chris Hughes, but instead decided to again offering space to Engelbrecht and Le to open Fishmonger.

“I really appreciate what Maureen and Adam are doing here because they’re not necessarily real estate people. They are in the entertainment business,” says Engelbrecht. “They came into Pullman, realized its potential and jumped at the chance. There’s so much creative stuff going on here and it’s so cool, and we’re so glad Fishmonger is a part of it.

The #1 order never to make at a seafood restaurant, according to chefs – Eat This Not That